The high-level event is part of the Financing for Development in the Era of COVID-19 and Beyond initiative launched by the UN Secretary-General and the Prime Ministers of Canada and Jamaica in May 2020.

See other coverage from High-level Event on Financing for Development - Financing the 2030 Agenda for Sustainable Development in the Era of COVID-19 and Beyond: 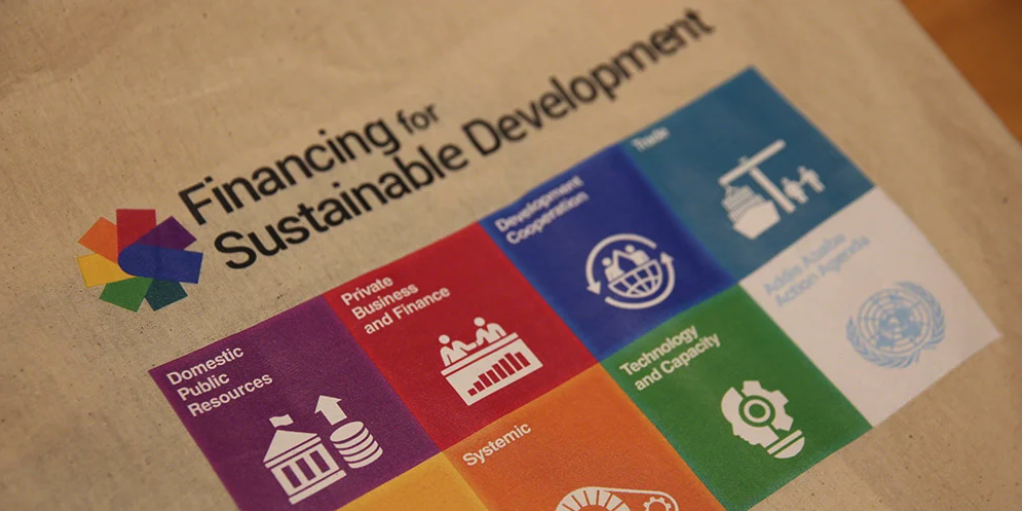 The high-level meeting is part of the Financing for Development in the Era of COVID-19 and Beyond initiative launched by the UN Secretary-General and the Prime Ministers of Canada and Jamaica in May 2020.

Together with the UN Secretary-General, the Prime Ministers of Canada and Jamaica convened a High-Level Event on 28 May 2020 to facilitate discussions with national leaders, international organizations and other stakeholders on developing financing solutions that will support countries in recovering from the COVID-19 pandemic and mitigate its negative impacts on development initiatives worldwide, particularly in relation to progress on the 2030 Agenda for Sustainable Development. Following the meeting, six discussion groups were convened to propose solutions in:

Canada, Jamaica and the Secretary-General convened a follow-up meeting with financial ministers on 8 September 2020, during which a wide array of perspectives and priorities were distilled and incorporated into a menu of policy options developed by the six discussion groups. Interventions during the High-Level Event held on 29 September 2020 will be incorporated into these policy options.

Stressing that challenges like COVID-19 can only be met through international cooperation, journalist and moderator Zeinab Badawi described the meeting as a major milestone in solidarity in the face of the devastation caused by the pandemic.

Looking back at events since the May 2020 High-Level Event, Justin Trudeau, Prime Minister of Canada, lamented that the pandemic has continued to upend economies. He explained the most promising ideas from this event would be included in International Monetary Fund (IMF) processes and Group of Seven and Twenty (G7 and G20) meetings, and that ministers would reconvene in December 2020 to discuss progress. He announced Canada will invest an additional USD 400 million in humanitarian and development funding to fight COVID-19 and remains committed to extending the G20 debt service suspension initiative.

Andrew Holness, Prime Minister of Jamaica, drew attention to developing countries’ challenges, including overburdened health systems and inadequate fiscal resources, and noted that women and the poor have been the primary victims amidst the pandemic. He underscored the need for global management of the recovery process and called for a global plan akin to the Marshall Plan. He also stressed the need for strengthened resilience and transitioning to green, sustainable and inclusive development.

UN Secretary-General António Guterres noted that, out of a total fiscal response of more than USD 1.5 trillion, only 2.5 % is accounted for by developing and emerging economies. Welcoming the debt service suspension initiative, he called for its extension to all developing and middle income countries that need it. He also called for total support of USD 100 billion to ensure equitable global access to a vaccine, and for greater support for development financing in Africa.

Delivering the IMF’s perspective, Kristalina Georgieva, Managing Director of the IMF, observed that in China and the advanced economies the situation is less bleak than in May 2020, thanks to governments’ synchronized fiscal stimulus action, but noted low-income economies remain more constrained. She said the IMF has provided nearly USD 100 billion to 81 countries to help them deal with the crisis. Georgieva identified as the “mandate for action”: sustaining support for people and businesses; focusing on high and growing debt levels; and “building forward better.”

Delivering the World Bank Group’s message, David Malpass, President of the World Bank Group, cautioned that 100 million people could fall into extreme poverty in 2020. He said that for many of the poorest, unsustainable levels of public debt have become an obstacle to development, and called on the UN to vocally support participation by all creditors in the debt service suspension initiative.

Describing the unprecedented challenges caused by the COVID-19 pandemic, Mark Lowcock, UN Under-Secretary-General for Humanitarian Affairs and Emergency Relief Coordinator, noted that extreme poverty will increase for the first time since the 1990s and the number of people facing starvation may double. He urged developed countries to act now, adding that a failure to take action is “an act of self-harm.” He called for protection of aid budgets and issuance of Special Drawing Rights devoted to poorest countries.

Outlining the consequences of COVID-19 on girls and women, Natalia Kanem, Executive Director of the UN Population Fund, noted that isolation and a lack of access to education will leave girls in “a merciless poverty trap.” She added that additional investments in health, education and development would save millions of lives and yield economic benefits worth more than 10 times their cost, giving opportunities to girls.

On the Financing for Development efforts, Amina J. Mohammed, UN Deputy Secretary-General, noted that recovery will not happen without Africa and called for financing at scale on the continent. She noted that the Addis Ababa Action Agenda will lay the groundwork to implement the financing options outlined by the discussion groups.