How to Make Hybrid Meetings Work

All three Rio Conventions announced in-person meetings for the final quarter of 2021. The trio of organizations—UN Framework Convention on Climate Change (UNFCCC), Convention on Biological Diversity (CBD), and UN Convention to Combat Desertification (UNCCD)—all seem to be going ahead full steam. The UNFCCC Bureau just announced it will hold three weeks of informal talks in June and agreed decision making is an in-person affair, to occur at the next formal meeting. (The day after this article was originally published, the UNCCD announced its COP will take place in 2022. A virtual ExCOP will adopt an interim budget this year.)

This is welcome relief to many stakeholders, especially those at the frontlines of environmental change. The pandemic brought disruption to many aspects of our lives. In the long run, the delays to the Paris Agreement climate ambition cycle, the CBD’s post-2020 global biodiversity framework, and the UNCCD’s land degradation neutrality goals may prove more disruptive. 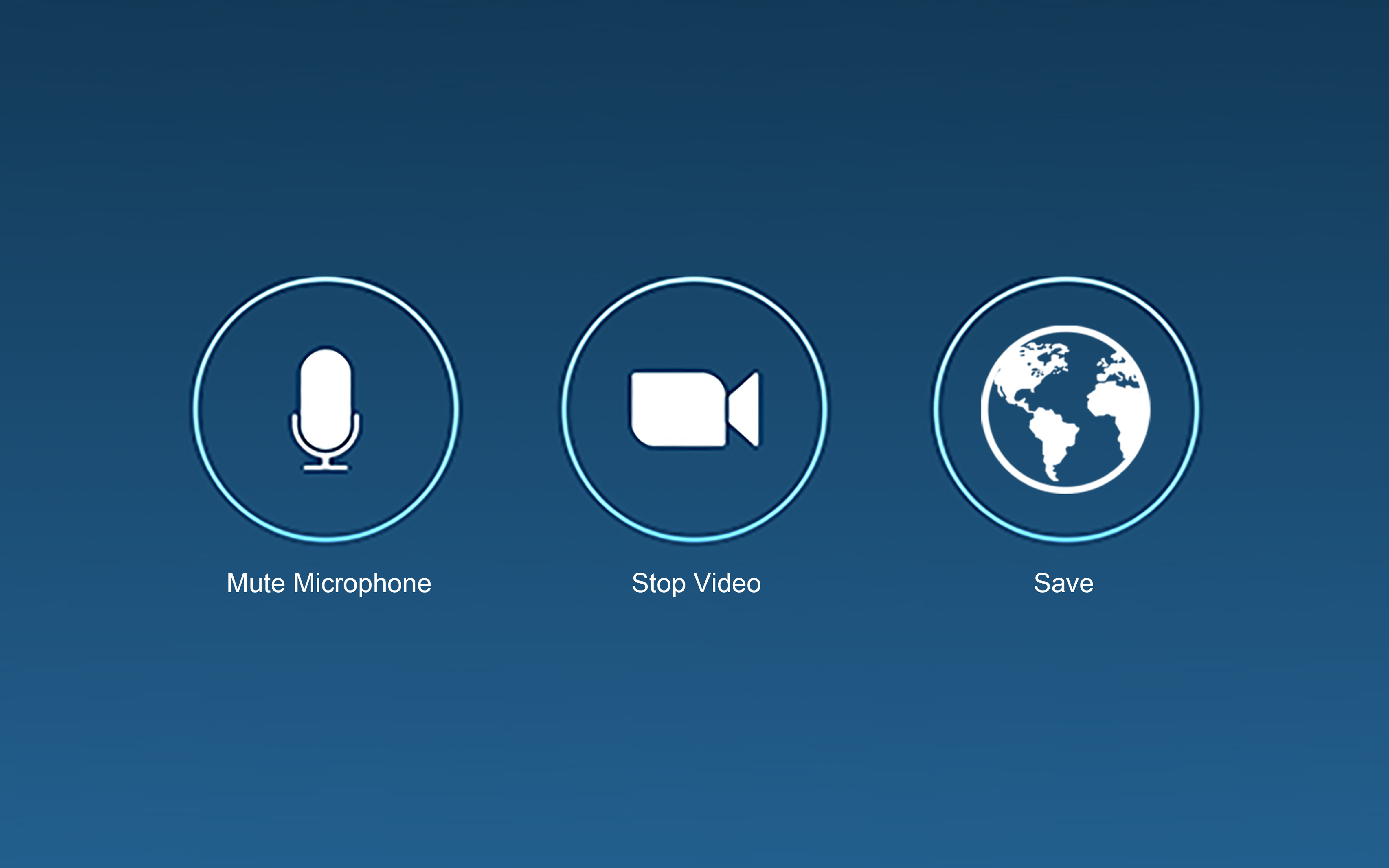 But these announcements are also worrisome for those living in the host countries, and for those debating whether to schedule international travel. The UK is due to host the UNFCCC meeting; it has one of the highest COVID-19 death rates in the world and international travel is currently illegal. Those closest to the site worry about 20,000 people gathering. China, host of the CBD meeting, has reportedly opened its borders to those with specific vaccines. The site for UNCCD has yet to be announced.

Efforts are underway to assuage concerns and move ahead with at least one “primarily” face-to-face meeting. The UK announced intent to share vaccinations with UNFCCC delegates. Quarantines are likely (although no word how the costs will be dispersed for developing countries). Notably, there has been little discussion on how to ensure civil society can participate safely and effectively. These in-person meetings run a real risk of undermining years of building trust and transparency among delegates and with civil society.

We thought we could try to help. With nearly 30 years of multilateralism under our belt, and a year of reporting on all the multilateral meetings venturing into cyberspace, we have a unique view of how major meetings can happen. 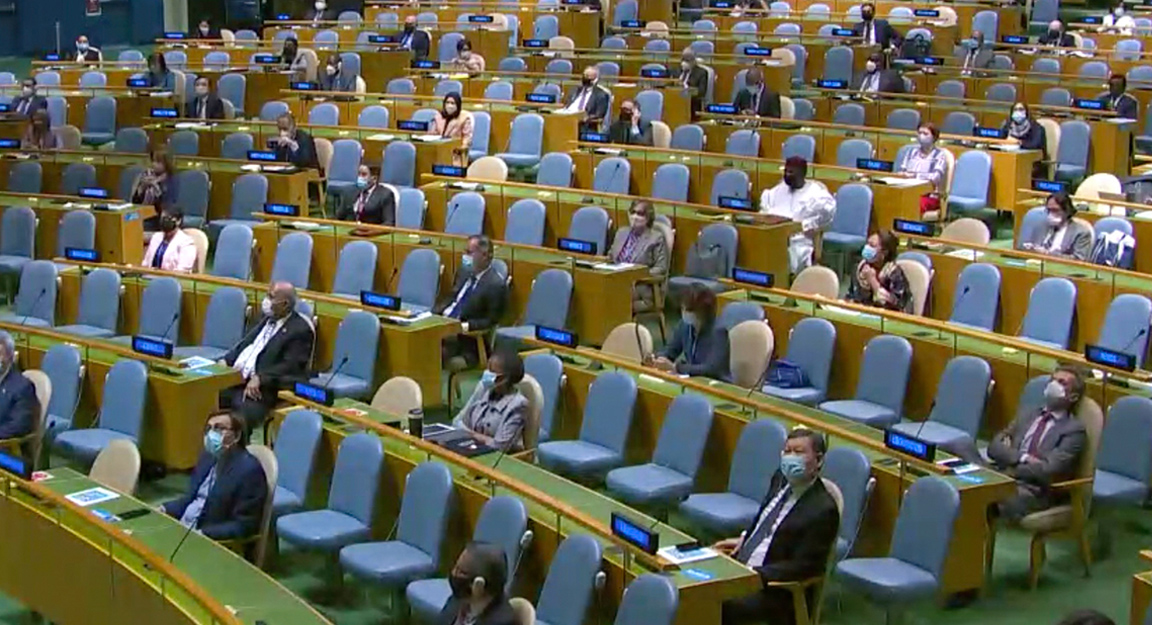 Modern negotiations assume ease of global movement. Gone are the days of sending a small team to negotiate a treaty in a railway car and bringing back an agreement already signed. Now, delegates gather from around the world meet in multiple rooms to work through various issues and are in constant contact with their capitals back home. Some recent meetings have used a hybrid model - part online, part in person. The online Open-Ended Committee of Permanent Representatives prepared for the UN Environment Assembly with components of a hybrid format, for example.

The Rio Convention COPs are also “coral reefs” where the wider ecosystem of actors gather to forward climate, biodiversity, and desertification action. Civil society and international organizations showcase their work. Ministers debate in roundtables and give speeches to signal priorities. There’s a lot on the go that is (at best sometimes) adjacent to the actual negotiations. All these events can be online. 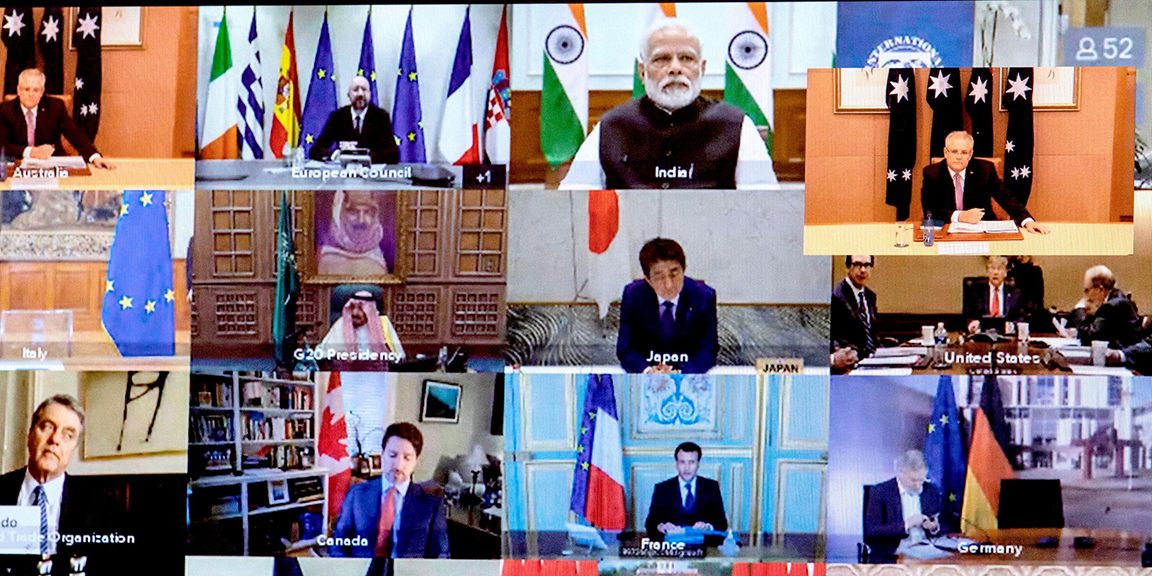 Keep the Leaders at Home

High-level speeches are often given to empty rooms, but are webcast to domestic audiences. Ministers and heads of state can easily reverse the beam - staying at home and delivering their speeches to the world. The Biodiversity Summit and Climate Action Summit showed this format is effective. Leaders pledged actions or renewed their solidarity for action.

This choice would have an outsized impact. Ministers or heads of government or state don’t travel alone. They bring a retinue of personal assistants, communications flaks, and even other ministers (plus their entourage). By one estimate, one minister multiplies into at least three people. With the possibility of at least one minister per party, that’s roughly 600 additional people attending for a series of speeches.

Of course, ministers can do more than give speeches. They have in the past helped with negotiations, providing the political keys to unlock stalemates. For UNFCCC talks, negotiations are technical. At COP 25, ministers were given a few issues to discuss while markets (aka Article 6) negotiations continued in parallel. CBD talks may need some guidance to finalize the post-2020 global biodiversity framework. However, many COP Secretariats and Presidencies have relied on strategically placed phone calls to unstick sticky situations in the past. To make this process more transparent, ministers could meet online beforehand and at a key point during the COP, and ministers from key countries could be put in touch for a coordination call.

Side Events Could Flourish Online

These events are held in parallel to each other, and to negotiations. Busy negotiation schedules often mean few negotiators can attend. At previous COPs, they were very rarely webcast and only those on site could benefit.

Online, the whole world is a potential audience. Many organizers at the HLPF side events noted their audiences were larger and more diverse than traditionally possible. Time zones could be flexible, to allow for regions to participate during their working day. For UNCCD, where land restoration approaches are regional in nature, this could be a benefit - why speak exclusively to those on site in Bonn, Germany (if the UNCCD Secretariat home does end up hosting UNCCD COP 15) when Asia-Pacific-based actors could speak to one another and decision makers in their region? The COP would remain the convening event for the festival of ideas that side events create; it just wouldn’t also be the convening location. 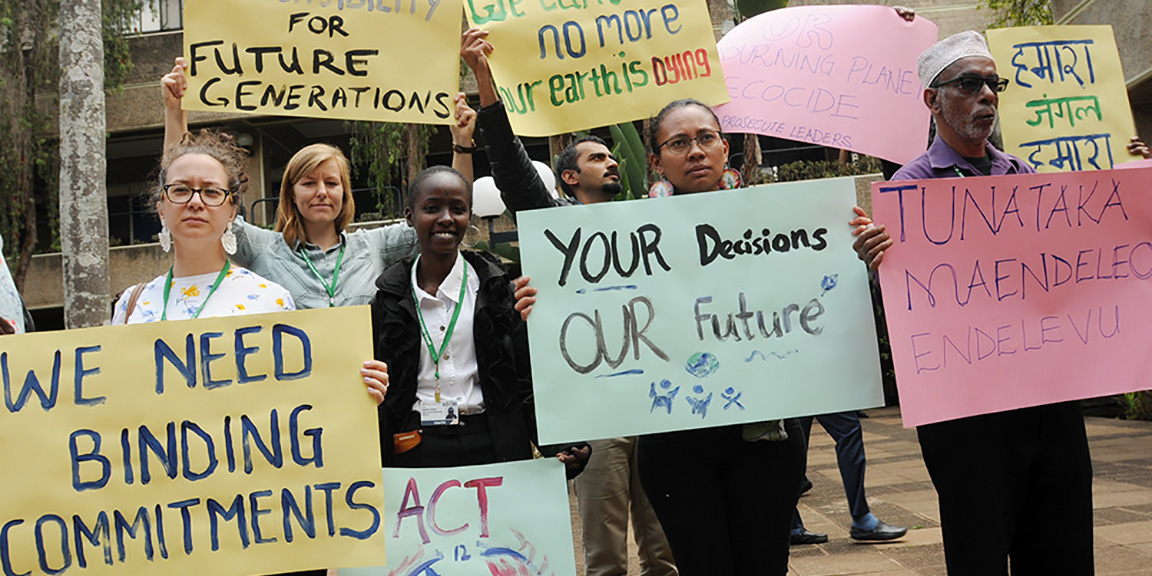 The one element that may be even more important than top-notch internet connections for a hybrid negotiation is a skillfully set agenda. Prioritizing issues for these upcoming COPs requires a careful diplomatic effort infused with pragmatism. Countries have their own priorities. A pared down or prioritized agenda requires balancing these concerns. Some issues can be slated for future, in-person discussions, with clear mandates and targets. Not all issues are solvable in a given meeting after nearly two years on hiatus (hello Article 6). Operational issues, such as budgets, can be agreed through the silence procedure - conducting online consultations to develop a draft decision that is sent to delegates and, if no one registers an objection in a given timeline, the budget is agreed. CBD already used the silence procedure to adopt its budget.

For climate, the priority is nationally determined contributions (NDCs, or countries’ pledges to the Paris Agreement), which do not require negotiations. They are nationally determined and merely submitted. But their collective ambition will signal whether the Paris Agreement can address the climate crisis—and the launch of ambitious NDCs in front of heads of state puts meaningful pressure on politicians to step up.

For negotiations, some Article 6 issues could be advanced. The Glasgow meeting is mandated to determine the process for arriving at a new collective finance goal. Progress on the reporting formats needs to be re-captured after a disappointing non-conclusion at the last meeting. What’s left? Common time frames for NDCs are important for ambition, but countries kicked that deadline years down the road.

For biodiversity, prioritizing is more complex, as our biodiversity expert Dr. Elsa Tsioumani tells us. The main task ahead—agreeing on a post-2020 global biodiversity framework—is a comprehensive endeavor, linked to the entire agenda of the CBD and its protocols on biosafety and access and benefit-sharing. This would include a set of goals and targets to address threats to biodiversity and to ensure its continued benefits to people through sustainable use and benefit-sharing. It would also need to integrate tools for mainstreaming, implementation support mechanisms, as well as a monitoring, reporting and review system, to mention only some of the core issues. Momentum heading toward Kunming has been fostered through a series of online consultations. Online meetings of the subsidiary bodies will be taking place next. These deliberations may help the organizers to prioritize issues for a successful COP, and at the same time will help the delegates practice their online negotiating skills. 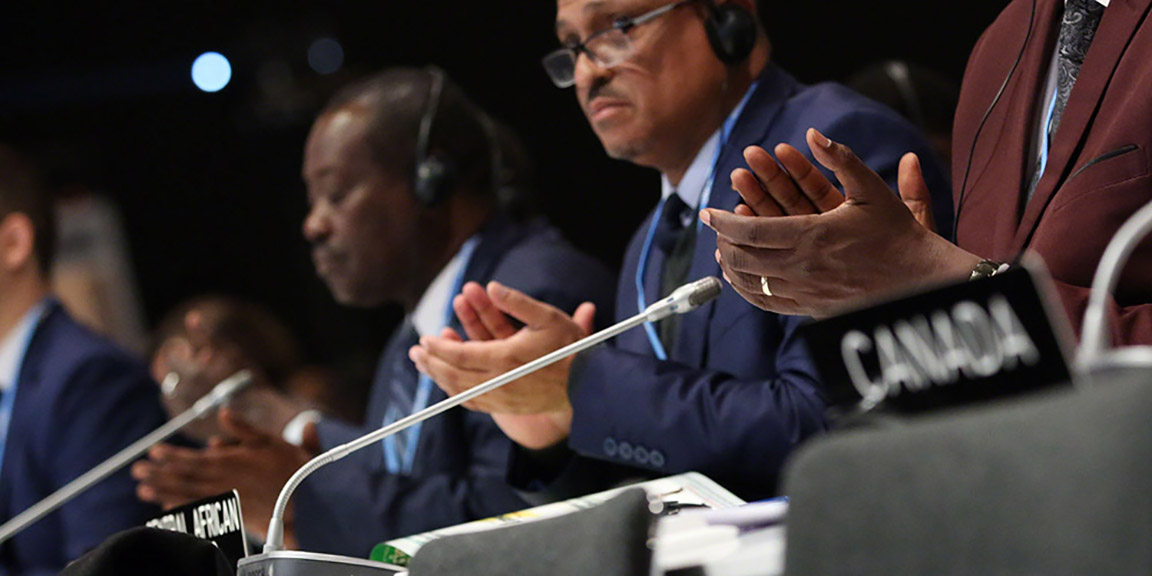 In many respects, implementation of the Rio Conventions does not depend on whether their COPs take place in 2021. For the UNFCCC, for example, the climate community continues to wait for updated nationally determined contributions (NDCs, countries pledges to the Paris Agreement). They were due in February 2020, but very few countries met the deadline. It was extended to the original date of the COP, November 2020. Then to the end of the year, because of COVID. Only 48 NDCs were submitted.

There is no need for an international meeting for NDCs. They are not negotiated. Countries could submit pledges tomorrow, with an email to the Secretariat and a press conference. Sure, countries love deadlines and celebratory events. Perhaps the pandemic should take precedence over leaders’ desire for a pat on the back. Again, this could be 1. Immediate and 2. Online.

Being inclusive vs limiting numbers: A hybrid COP model is not without serious challenges and tough decisions. How can a representative group of civil society actors be involved? Transparency is fundamental to good governance - it is at the core of the Earth Negotiations Bulletin’s mission. With uneven vaccine rollouts around the world and the event taking place in Europe, there is a risk the organizations from the Global North could dominate CSO involvement.

Managing expectations vs building momentum to act: The climate, biodiversity, and desertification crises loom large. We need action. For that, we need global agreements and commitment. Leaders must trust they will all move in lock step. But these meetings are taking place during a global pandemic, and expectations must be adjusted. We can still insist that the priorities should be covered.

61st Meeting of the GEF Council